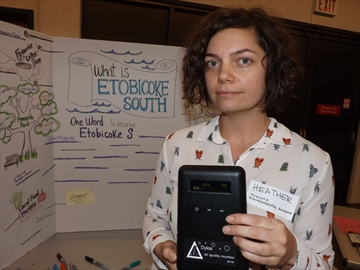 Ideas ranging from electric car plug-in stations to citizen air monitoring and fruit trees with lush gardens being grown in Etobicoke parks were pitched by environmentalists to make the community a more greener place to live.

More than 100 south Etobicoke residents packed an informative Live Green Toronto meeting at the Mimico Centennial Library to meet neighbours, share ideas or work on projects to revive the area.

The meeting is the first of several to be held across the city with a report to be prepared for the Parks and Environment Committee.

Most residents said they were concerned about air quality in the area.

An air quality study of wards 5 and 6, from Burnamthorpe Road south to Lake Ontario; and from Hwy. 427 east to Humber River, was conducted by city staff in 2014 and found articulate matter and nitrogen dioxide emitted by traffic is responsible for a less than 10 per cent increased risk of premature death for those living nearest the highways.

“The most significant source of concern is that of motor vehicles, in particular the emissions tied to the volume and type of motor vehicle traffic travelling Highway 427 and the Gardiner Expressway,” stated the report.

Heather Marshall, of the Toronto Environmental Alliance, was holding a small device residents are being urged to carry during their daily walks to measure air quality.

“All the air measurements can be downloaded in real-time,” Marshall said. “We want residents to carry around the devices in their area for one week at a time.”

She said the devices can be obtained from the Alliance.

“We are trying to improve and clean up our air quality,” she said. “We plan on monitoring the air and to collect data from across the neighbourhood.”

Former Etobicoke Alderman and MPP Ruth Grier, a longtime champion of the environment, is worried by the air quality and large amount of high-density condos.

“The air quality has always been a big concern in this area,” Grier admitted. “We are also concerned about the over-development that is taking place without enough green space for people.”

During the Tuesday, Feb. 17 meeting, Jim McNeil, chair of the Long Branch Business Improvement Area (BIA), said $10,000 was allocated in his BIA’s budget to study the installation of plug-in stations for electric or hybrid cars.

“We were looking at installing three or four stations for customers using our stores,” McNeil recalled. “There was a lot of interest and we wanted to be a leader rather than a follower.”

He said the plan was put on hold after Toronto Hydro and parking officials called for studies.

Volunteer facilitator Yasmin Parodi said some residents would like to plant vegetable gardens, fruit trees and install pollinators for bees in public parks.

“People want more creative use of our public spaces,” Parodi noted, and suggestions were made to grow food in green spaces.

John Drennan, of Storefront Humber and a life-long area resident, said he is irritated by the traffic congestion that leads to air pollution.

For more information on the Live Green Toronto and its upcoming meetings on air quality, visit www.livegreentoronto.ca or contact the Community Facilitator for the Etobicoke area, Tamara Tukhareli ttukhar@toronto.ca