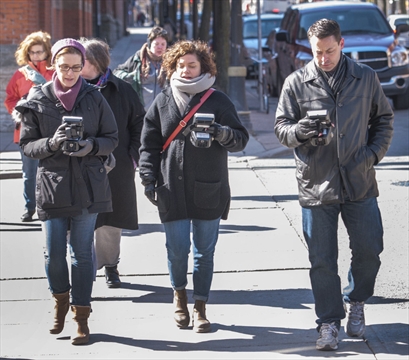 The air felt crisp and the sky looked clean and blue — but air quality cannot be judged solely by the human eye.

It was the launch of an air quality project called INHALE: Initiative for Healthy Air & Local Economies. The idea is for volunteers to monitor air quality levels and record findings for the rest of the year.

Before setting out, the group of five gathered to learn how to use the $500 hand-held air quality monitors, which measure particulate levels in the air and track their GPS position.

After instruction from Environment Hamilton director Lynda Lukasik, they walked up and down James North.

A high number on the readout screen meant a high particulate count, and unhealthy air.

The readings typically seemed in the fair range, but jumped into poor and very poor at intersections with cars idling and when buses passed.

Outside a market at James and Robert streets, where several people gathered smoking and traffic was busy, the reading jumped to 1,800 or "very poor."

Readings capture only a moment in time and the good and the bad must be averaged out, but moments in time matter, since humans inhale every three seconds.

The INHALE project will start with a focus on the Jamesville and Beasley neighbourhoods and expand further east, said Lukasik. About 18 volunteers will be involved in using the monitors to collect data.

On James North new buildings continue popping up. Lukasik said that while this is a positive thing, it has negative impacts on air quality from dust and other particles generated.

"We want people thinking about air quality in the urban neighbourhood with all the change happening — how can we grow and evolve and enhance the quality of urban life?"

She added that spring is a critical time of the year for air quality because of salt and dirt on roads from winter.

She suggested that initiatives like INHALE could lead to measures as basic as more frequent street sweeping, to more ambitious projects such as tree planting programs — trees help trap particles from floating in the air — and construction of vegetation-covered green roofs.

Several of the project volunteers live in the north end of the city, including Ron Jones.

"That's why I'm here," Jones said. "I'm concerned about the air quality in my neighbourhood."

The air monitoring project is a joint effort between Environment Hamilton and the Toronto Environmental Alliance. For more information, go to www.inhaleproject.ca.